Method of Contraception that is used within 72 Hrs of unprotected intercourse to prevent pregnancy also called "Morning after" or post-coital contraception.

A Woman who had an unprotected sex, and she wants to prevent pregnancy. For example:

The Government of India guidelines for Emergency Contraception recommend use of Levonorgestrel (progestogen only) NG 0.75 mg as a "dedicated product" for effective emergency contraception. The Drug Controller of India has approved only Levonorgestrel for use as ECP.

Any Woman can use emergency oral contraception if she is not already pregnant.

When Should ECPs be taken?

Prevent sperms and egg from meeting.

Possibly prevents egg from being emplaned in wall of uterus.

Many Women can use Copper-bearing IUDs can be safely used by Women who:

IUD is out of place.

One of the safest and most effective family planning methods.

One of the few contraceptive options available to men

How does it Work?

A small opening made in the man's scrotum and the Vas deferens on either side are closed off.

This keeps sperms out of his semen. The man can still have erections and ejaculate semen.

His semen, however, no longer makes a woman pregnant because it has no sperms in it.

If there is a charge, often less expensive

Can be tested for effectiveness at any time.

If pregnant occurs in the man's partner, less likely to be ectopic than a pregnancy in a woman who has been sterilized.

Most Women can have Sterilization

Uterus raised and turned to bring the 2 fallopian tubes under the incision.

Each tube is tied and cut, or else with clip or ring.

Incision is closed with stitches and covered with adhesive bandages.

The Woman receives instructions on what to do after she leaves the clinic or hospital. She usually can leave in few hours (observed for 4 hours postop.)

Abdomen is inflamed with gas or air.

Small incision (about 2 cm) made and laparoscope inserted.

Each tube is closed with

The gas or air islet out of woman's abdomen

Incision is closed and covered with adhesive bandages

The Woman receives instructions on what to do after she leaves the clinic or hospital. She usually can leave in few hours (observed for 4 hours post-op.)

After the procedure, the woman should

How to prevent failures of female Sterilization: Two Methods

Schedule procedure should bedone within 7 days following the menstrual period.

Fallopian tubes should be identifying properly by tracing them right up to the finbrial end prior to occlusion. 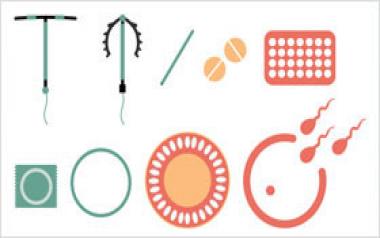